A beacon which has attracted travellers for centuries.

With a spire that is the tallest in Britain it’s no surprise Salisbury Cathedral dominates the city skyline and can be seen for miles around.

In fact, among medieval stone towers and spires in Europe it is second only to Strasbourg which has a height of 142m. 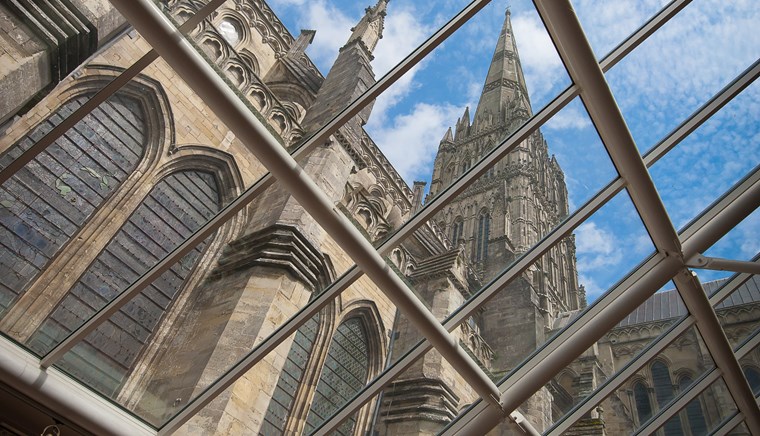 The spire may be one of the cathedral’s most impressive features but it has proved troublesome over the years. If it wasn’t for the addition of buttresses, bracing arches and anchor irons over the centuries, the massive weight of the spire (6,500 tonnes) would have proved too much and it may have fallen down – just like those at Malmesbury Abbey and Lincoln Cathedral.

In 1668, after the spire was found to be leaning, Christopher Wren (who designed St Paul’s Cathedral) was called upon to help. He added reinforcements which have seen the spire keep its form to this day.

The top 9m of the church spire was rebuilt in 1950, and the iron cross removed. It can now be viewed in the North Quire Aisle. Both spire and tower were extensively restored between 1986-1996. It definitely offers some great views for those who work on it – as you can see below!

Those who want to see find out more about the magnificent spire can take a ‘Tower Tour’ at the cathedral. Visitors can wind their way up 332 steps to see the spire close up, and enjoy breathtaking views while experienced guides explain all there is to know about the construction of this architectural masterpiece. (**Please note the Tower Tour is suspended until further notice due to Covid restrictions.)