This week, bird protection experts measured, weighed and ringed the cathedral's peregrines chicks for research and to help protect the species.

The ringing of the chicks was carried out by Nigel Jones, a registered bird ringer with a licence to do so from the British Trust for Ornithology (BTO). He was assisted by Phil Sheldrake the Nature Conservation Advisor for the cathedral.

To date, via these orange rings, two of the cathedral's chicks from previous years have been spotted in the field, one near Stockbridge and another near Milton Keynes. 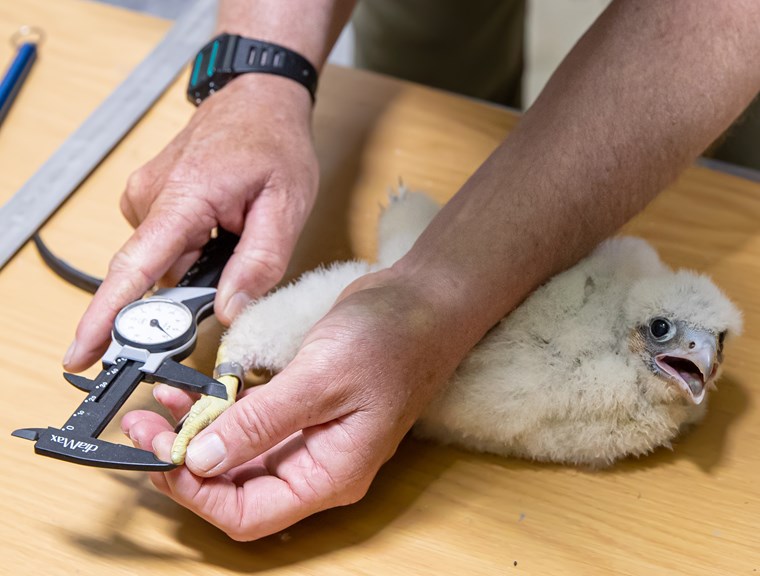 The chicks are thought to be thriving and it's believed there are two females and two males weighing in between 530 grams and 830 grams – the heaviest being a female that already weighs as much as a fully grown male (830 grams). She’s very easy to spot on the nest because so she is so large.

The four Salisbury chicks will remain on the Cathedral Tower balcony until June, when they are expected to fledge. They will stay around the Cathedral for at least a month after that, learning survival and hunting skills from their parents before striking out on their own.

The 2021 cathedral peregrines chicks will be named, and Salisbury Cathedral is asking for you to vote in their naming competition. Vote here.

Since going live in March this year the peregrine's webcam page has recorded nearly 188,000 unique page views – and Monday 3rd May the page was watched 9,000 times, the highest daily viewing number to-date. Records show that across 2020-2021 viewers from 88 different countries have watched the birds. Salisbury's peregrine chicks are a real hit across the globe!