From Saturday 28th August to 1st November, join us for the Salisbury Story Trail – a family friendly adventure taking you on a journey through the history of Salisbury and the story behind our exciting new marque!

The marque is part of a new vision for Salisbury. One that will showcase it as a modern medieval city and help it to stand out from all the other cities competing for visitors and investment.

Follow our trail to find all nine elements at different locations across the city centre. At each stop-off you will be able to learn more about the fascinating story behind the letters.

Download the Salisbury Story Trail booklet here, or pick one up from Salisbury Information Centre.

The marque – which spells out SALISBURY - has been inspired by the stonemasons that chiselled and crafted the stones at Salisbury Cathedral 800 years ago.

The elements were co-created using talented young designers from Wiltshire College, with each letter inspired by a different part of Salisbury’s history. Discover each of the stories…

S The design of the letter ‘S’ was inspired by the medieval layout of Salisbury, which is known as a Chequers grid pattern. If you look at a map of the city today, you can clearly see how we still have streets laid out in a pattern that was decided hundreds of years ago when Salisbury - or New Sarum as it was known then - grew around the new cathedral. This design really shows the city’s incredible heritage. A The creative spirit of Salisbury can be seen in its flourishing artistic community. The abstract ‘A’ shape echoes the bold and unique artwork in and around the city, with the design taking inspiration from abstract sculptures at Roche Court New Art Centre in East Winterslow. Salisbury has a vibrant artistic community in its city centre, with both the popular Fisherton Mill Gallery and Gallery 21 showcasing art from both local and international artists. Salisbury is buzzing with creativity and spirit. L The letter ‘L’ mirrors the beams and patterns of Salisbury’s original Tudor buildings. These properties were built out of long wooden beams and wattle, made up of branches and twigs, from the 14th to the 16th century. The most noticeable buildings in this style are in the Market Place, with many on Queen Street, Butcher Row and Fish Row dating back to the 16th century. Hundreds of years ago, most of Salisbury city centre would have looked the same as these buildings, with their angular wooden beams. I Salisbury’s world-famous cathedral is central to the city’s traditional originality. The ‘I’ represents the iconic cathedral spire that reaches high into the sky. Although the cathedral’s main body was constructed between 1220 and 1258, the spire was completed later in 1320. It stands at 123 metres (404 feet), and has been the tallest church spire in the United Kingdom since 1561. The spire of Salisbury Cathedral is certainly an irreplaceable part of Salisbury’s spirit and one of the city’s most iconic images. B The letter ‘B’ is shaped from the medieval arches seen across the city, like the twin arches on the side of St Thomas' Church. These are typical of medieval Romanesque and Gothic architecture and represent the deep history of Salisbury as a prosperous medieval market town. Salisbury Cathedral also has similar arched windows. These designs are a beautiful exhibition of Salisbury’s vibrant heritage and reminder of the city’s ageless beauty. U The Salisbury we know and love didn’t always exist. In 1220 the decision was made to build a new cathedral and the city – which was called New Sarum back then – grew around it. Before that, the
cathedral and original settlement was located at Old Sarum. The site has signs of prehistoric settlement from as early as 3000 BC and later became one of England’s largest Iron Age forts. The hillside remains at Old Sarum still follow the shape of the Iron Age hill fort and the Norman stone wall, built to protect the site from invasion. The letter ‘U’ in our trail depicts this outline of the medieval remains and the rich heritage Salisbury has to offer. R During the Second World War, more than 2,000 Spitfires were built in secrecy in Salisbury after the previous location of Southampton was bombed by the Luftwaffe. To make sure the new Salisbury
locations were kept secret, Spitfire factories were hidden behind the façade of bus depots, sheds and garages. The planes were built by young women, boys and elderly men with no previous mechanical experience, and only afew engineers. The letter ‘R’ takes inspiration from this story, and symbolises the iconic RAF roundel that can be found on the wings of Salisbury’s ‘Secret Spitfires’. 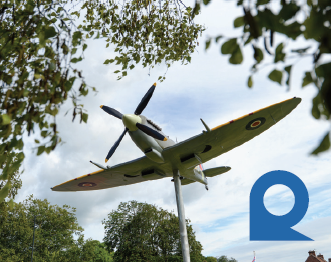 Y Salisbury Cathedral towers protectively over the city. For over 800 years it has been a focal point
and inspiration for residents and travellers. There would be no Salisbury without its cathedral, and the building’s ageless beauty and rich heritage still impress today. The main body of the cathedral was constructed from 1220 to 1258 and was built in the Early English Gothic style of architecture.
The letter ‘Y’ mimics the famous pillars and arches that are part of the dramatic design.