A Duke beheaded in Salisbury

On 2nd November 1483, Henry Stafford, 2nd Duke of Buckingham, was beheaded on Salisbury’s Blue Boar Row. He was put to death by the then king, Richard III – why? Because of a royal power struggle.

Why was there a power struggle?

It began when Richard III assumed power following the death of Edward IV. Edward’s son, Edward V was meant to be crowned king but Richard declared the 12-year-old and his brother illegitimate and took power himself.

After being locked up in the Tower of London, the young princes disappeared, presumed murdered. The Duke of Buckingham has always been one of the primary suspects in their vanishing – what has been dubbed the Princes in the Tower.

After this, for reasons that are unknown, Henry Stafford jumped sides and led a rebellion against Richard. It was the exiled Henry Tudor (the future king Henry VII) who now gained the Duke’s support.

Buckingham advanced with his rebels from Wales but a flood on the River Severn forced a halt and his army deserted in large numbers as Richard's forces approached them.

The Duke tried to escape in disguise but he was turned over to the king by a friend for a large bounty that had been placed on his head.

What happened after the Duke was caught?

The rebel leader was then brought to Richard in Salisbury.

Despite his pleas, the king refused to see him, and after a summary trial, he was convicted of treason. Buckingham was beheaded in Salisbury on the following day of 2nd of November 1483.

What happened to Buckingham’s body next has become something of a mystery.

We don't know what happened to the Duke's body

There was a report from that time that said he was buried in the church of the Greyfriars in Salisbury. This was a Franciscan Friary which stood near to St Anne’s Street but it has now completely vanished.

There is also a plague in St Peter’s church in Britford, a village just outside Salisbury, that says the Duke lies in a tomb there however there are concerns about this because the tomb is from an earlier period. There are some that believe it may have originally come from the old Greyfriars Friary and Stafford had been laid to rest there before it was moved to Britford during the Reformation. 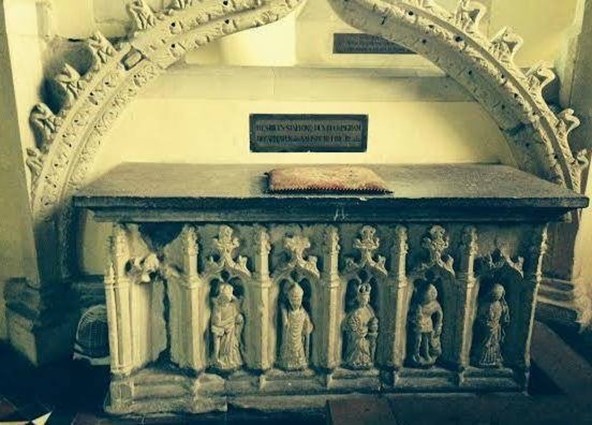 The Duke’s son-in-law George Earl of Huntingdon, actually owned the manor at Britford. So perhaps his daughter Anne, wanted her father close.

We may not know exactly what happened to the Duke of Buckingham and his beheaded body, but his ghost is said to still haunt the former Debenhams store in Salisbury.

His last few hours alive were reported to have been spent locked in the attic of the building, which was the Blue Boar Inn at the time, before his execution took place outside. There have been so many reports of hauntings here that he is now known as The Duke of Debenhams.

If you want to know more about the ghoulish side of Salisbury you can take part in one of the ghost tours that take place around the city. Just rememember to watch out for The Duke of Debenhams!