Magna Carta is one of the most celebrated documents in English history, and you can find it right here in Salisbury.

In 2009 UNESCO entered the historic paper into the Memory of the World Register which is a list of the world’s most important documents.

The one that is now housed in Salisbury Cathedral is the best preserved of only four surviving copies and is displayed in the Chapter House within an interactive exhibition.

What is the Magna Carter?

The historical document was issued by King John in June 1215 during a time of political crisis. It was an attempt to prevent a civil war between the king and his powerful barons, who were leading an uprising against him at the time.

After years of turbulence, in May 1215, the leading men of the country renounced their oaths of allegiance to the king, choosing Robert fitz Walter as their leader instead. In the same month they captured the city of London and King John knew he had to act and began negotiations.

On 19 June the rebel barons made their formal peace with King John and renewed their oaths of allegiance to him. Copies were drawn up of the agreement and distributed across the country as evidence of the king’s decision. It is not certain how many copies of the 1215 Magna Carta were originally issued (although it’s thought to be 13), but four copies still survive: one in Lincoln Cathedral; two at the British Library; and one in our magnificent cathedral in Salisbury.

What is in the Magna Carter?

Magna Carta was the first document to put into writing the principle that the king and his government was not above the law. It sought to prevent the king from exploiting his power, and placed limits of royal authority by establishing law as a power in itself.

There are 63 clauses in total in the charger, covering many areas of the nation’s life but only three of those clauses remain part of English law. One defends the liberties and rights of the English Church, another confirms the liberties and customs of London and other towns, but the third is the most famous and gives all free men the right to justice and a fair trial:

No free man shall be seized or imprisoned, or stripped of his rights or possessions, or outlawed or exiled, or deprived of his standing in any other way, nor will we proceed with force against him, or send others to do so, except by the lawful judgement of his equals or by the law of the land. To no one will we sell, to no one deny or delay right or justice. 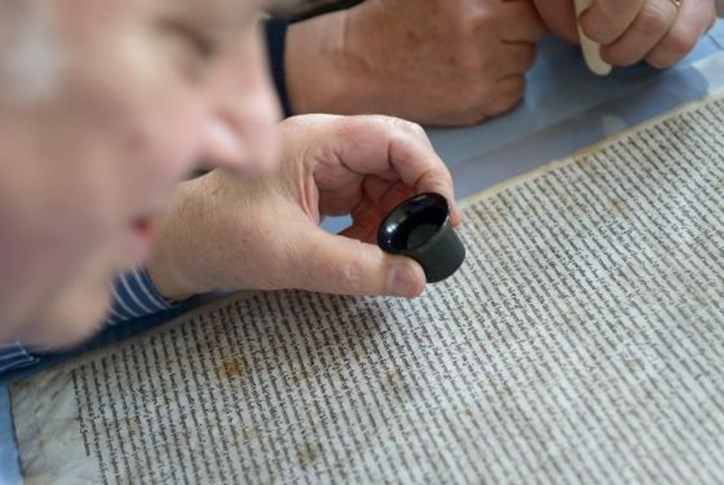 The connection to Salisbury

Present at Runnymead was Elias of Dereham. He was steward to one of the key players in the crisis, the Archbishop of Canterbury, Stephen Langton, and a negotiator between the two sides.

Once Magna Carta was agreed and sealed he was entrusted with delivering ten of the copies made, one of which was given to the original cathedral at Old Sarum. Elias later became a canon of Old Sarum before masterminding the building of the present Salisbury Cathedral, and moving the document to its current home.

Salisbury Cathedral’s copy is the best preserved of the four that remain. It was written in Latin by hand, by an expert scribe, on parchment (animal skin, in this case, sheepskin). Medieval documents like this were not signed, but sealed, and at the bottom of our Magna Carta you can see the marks where King John’s seal was once attached.

In 2018, an attempted was made to steal Salisbury’s priceless copy of Magna Carta from the Cathedral. Mark Royden had wanted to prove it was a fake. He went equipped with a claw hammer, gloves and safety goggles, tampered with a CCTV camera and set off a fire alarm to cause a distraction before smashing the document’s protective case.

Mr Royden, of Kent, was then pursued by members of the public and cathedral staff before being detained.

It was two years later, at Salisbury Crown Court in January 2020, that a jury found him guilty of attempted theft and criminal damage, he was later sentenced to four years in prison.

For three months after the attack the Magna Carta document was kept in storage and examined for damage. Luckily the display case did its job and it was left unscathed and was eventually put back on display in 2019. It is now displayed behind a new case that contains hidden safety features which means that it is has the highest security rating of any case in the UK.

You can see Magna Carta and learn more about its history by visiting Salisbury Cathedral. Tickets must be booked in advance.

Take a tour of the rest of the cathedral while you are there. There is so much to see and learn, from how the UK’s tallest spire was built to the world’s oldest working clock. And, don’t forget to stop in the Refectory for refreshments to get a spectacular view of the towering spire.